“Both are very deserving of this opportunity, as they have been and remain critical for the agency’s well-being, client retention, and in maintaining carrier relationships,” said Don. 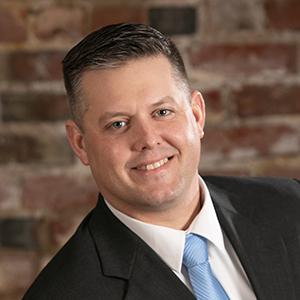 Kyle grew up in Allen County and graduated from Bath High School. After high school, he accepted a scholarship to play college baseball in Virginia. Unfortunately, due to an injury, his baseball career was cut short. Kyle transferred and finished his college degree at Ohio State University in Columbus, Ohio. There, he met his wife Jori (Pfeister) of Kenton.

They have two young children and have settled in Allen County after spending 11 years as teachers in Florida. They have restored a farmhouse originally owned by Kyle’s great-great-grandfather. The couple is excited to be home in Ohio to raise their family and rekindle many old friendships.

Kyle serves as an Insurance Advisor and has achieved both his Property/Casualty and Life insurance licenses. Kyle is excited to help families and businesses acquire the necessary insurance coverages at a competitive price.

The Story of Block Insurance

What started it all?

In 1945, Floyd Block was licensed to sell fire insurance while continuing to work the family farm. Floyd and his wife Edith operated the insurance agency from their home until their son Ken Block joined them in 1975 after graduating from college.

Soon after, the agency incorporated and built a new office at 315 E. Wapakoneta St. in Waynesfield, OH. In 1978, Floyd and Ken were joined by Roger Tuttle who left Sheller Globe to join his old classmate Ken Block, and they continued as owners after Floyd’s retirement.

Then in 1998, Don Ritchey joined the agency having worked for Motorists Insurance for 18 years in claims and marketing.  In 1999, Roger and Don purchased the agency from Ken Block and his wife Pat.

The agency continued under Roger’s leadership until 2013 when Don purchased the agency from Roger. Roger stayed on and continued to work until 2017 when he fully retired.

The future continues to look bright for Block Insurance with the aforementioned additional officers leading a talented, experienced, and dedicated staff.  “I continuously remind myself how blessed this agency is to have dedicated and professional employees,” said Don.

Block Insurance is an independent insurance agency that strives to provide insurance advice to clients to enhance their security and quality of life.